Faster stocktakes are only the beginning for ASX-listed agribusiness Ruralco, using the SAP HANA Cloud Platform as the foundation for further innovation. Freya Purnell reports.

Ruralco Holdings Limited is a diversified agribusiness group, operating over 500 retail outlets across Australia. The group was seeking to improve its inventory management process, which was partially paper-based, and partially run on a desktop SAP solution. With users having to undertake several steps manually, it was a slow process, and costly to the business as stores had to be closed while the stocktake was completed.

“As a strategy, I wanted the business to move to a more mobile mindset within our retail network that allows increased operational flexibility in the stores. Obviously to achieve this, we needed to provide the platform that enables us to move away from the traditional SAP interface on a PC to SAP on a mobile device,” he said.

Another important aspect was having real-time capability, to ensure information could be captured once and entered into the ERP environment in real time.

An Australian-first implementation, in six weeks

Ruralco engaged Melbourne-based Bourne Digital to build a custom Fiori app for the stocktake process. The app needed to be able to run seamlessly on multiple device platforms for hundreds of users right across Australia, including those who had low levels of technical literacy or who were not heavy mobile device users.

“We started with developing personas, and doing research on the end users. It was really important to understand who all the different people doing stocktake were, and design and build it for them,” said Ahmed, adding that prototyping was also crucial. “Splash and Build was able to prototype exactly what the app would look like, and we were able to test with the users before moving into development.”

This meant that there were no surprises to the business when the app progressed to the next stage.

“That human-centred design approach actually helped to speed up the process,” Ahmed said.

Bourne Digital then utilised SAP Fiori, cloud service, which runs on the HANA Cloud Platform, to develop and deliver the app. This was no mean feat, given that the cloud service was only released in March this year. Being able to use Fiori was a major attraction for Ruralco, which runs SAP as the strategic IT core of the business.

“The development and deployment timeline is really quick, so it’s nice and agile in terms of being able to deliver business requirements effectively,” said Hansen.

And it was certainly fast – together the Bourne Digital and Ruralco team, with some assistance from SAP on technical aspects, were able to complete the UX design, infrastructure set-up, development and testing to have the app up and running in just six weeks – becoming the first custom Fiori app to use the cloud service on HANA Cloud Platform in Australia.

Breaking new ground in this way did mean there was something of a learning curve for everyone involved.

“Deploying and productionising SAP HANA Cloud Platform was in itself not too difficult, but we needed to come up to speed and learn about the technology fairly quickly.  We were able to achieve this through great partnership between my infrastructure and Basis teams, Bourne Digital and SAP in Walldorf who were extremely supportive,” Hansen said. “At the same time, we introduced the Fiori client and architecture, so that was new and unique and supports our overall mobility strategy very well.”

And how did they meet such a tight timeframe?

“The key factors were having the right resources on the ground, working closely with the business to make sure that their requirements were met first go, and choosing the right partner to work with as well,” said Hansen.

Preparing for stocktake – and more apps in the future

Ruralco is now in the process of deploying the app across all its business units, ahead of the company’s annual stocktake in September. Hansen said they have invested in new Symbol TC75 Android devices dedicated to running Fiori, which enable Ruralco’s IT team to remotely manage and control the devices, simplifying user and device management. While Ruralco’s Fiori app can also be run on iPhones, and there are several thousand in use across the business, these are used as secondary devices as they can’t be administered remotely.

With the app having a simple and intuitive user interface, much like a calculator, it is expected to speed up the stocktake process, allowing stores to remain open, and removing data entry errors from the process. 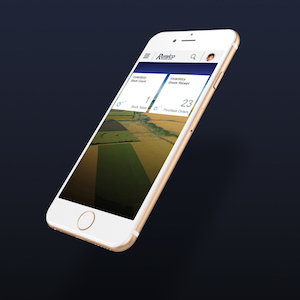 “A lot of importance was placed upon minimising the number of button touches and interactions because they want people to get through it as quickly as possible, so the whole mobile workflow is so important,” said Ahmed.

But perhaps mostly importantly, Ruralco now has the confidence in the platform to tackle other processes in the business with other applications, such as goods receipting, price enquiry, stock enquiry and stock movement.

Hansen said the company has already started work on several new Fiori-based app’s for store goods receipting and product picking within their warehouses which will connect Fiori to SAP’s (WM) Warehouse Management module.

“It’s a complete solution for the warehouse team, warehouse staff will use Fiori to do goods receipting into the warehouse, do bin put-aways as well as pick stock – all running over our SAP WM environment.”

Overall, Hansen said the HANA Cloud Platform and Fiori will enable a much more agile approach to mobile deployment – essentially, doing what it says on the box.

“It moves away from the traditional mindset of developing SAP applications or functions to a more mobile and easier to use platform.”